In the aftermath of unexpected events and existential emergencies, such as when banknotes are burnt in a fire, it is sometime possible to turn to the national central bank to request a replacement for damaged cash (legal tender).

There are rules. For instance, more than half of the original bank note must be in tact in order to receive a new replacement for the damaged original. A plausible story must be told, with evidence, even supporting testimony. This is a metaphor for my ethnographic inquiry into material artifacts of money and monetary policy.

Money—even a damaged bank note—does not necessarily speak for itself.

In order to unravel its meanings, the pragmatic concerns that animated its use, and the forms of managing its material and immaterial ‘value,’ stories are told, silenced, remembered, and actively forgotten.

Money must be accounted for, even if it exceeds such measures and leads us to question its condition of possibility. 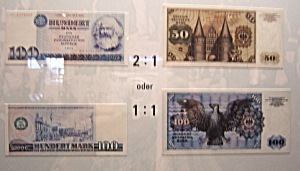 My dissertation, Accounting for Money: Keeping the Ledger of Monetary Memory in Germany, traced the socio-economic problem spaces and afterlives of the 1990 currency and economic union between West and East Germany, and the parallel process of creating the European single currency. Based on two and half years of full-time multi-sited (geographically and institutionally) ethnographic fieldwork in Frankfurt am Main (West) and Leipzig (East) Germany, I show the pragmatic challenges of defining, enacting, and materializing relations of solidarity and obligation through new forms of monetary relations. 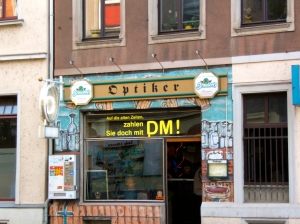 In pursuing this line of inquiry, a key focus of my research incorporated participatory ethnographic research on the communications work of the German Central Bank (Deutsche Bundesbank) in Frankfurt am Main and Leipzig because of its central role in building economic literacy for the euro. In Germany, the euro is a complex bundle of economic, political and historical obligations to and for Europe. I tracked how members of the public—from experts and specialists at the central bank, to small entrepreneurs, to ordinary citizens— deployed multiple repertoires in evaluating the euro, which in turn were sharply distinguished by the uneven experiences of unification in which the 1990 currency union devalued the East German economy yet also symbolized equality and solidarity.

Whereas anthropological and social science studies of finance and expertise have focused on the technical practices of internal financial technologies to theorize the limits of technocratic expertise, my ethnography captures instead the ‘front-line” public relations work of experts and central banks as they authorize new relational and technological infrastructures tied to a shared currency. Simultaneously I attended to how non-experts engage, internalize and complicate the performative practices of monetary policy on daily life. 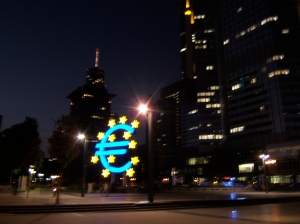 My current research expands on my dissertation through a focus on German policy discourses and responses to the euro debt crisis. In particular, I consider German proposals for Greece and Greek responses, such as externally imposed austerity measures. My aim is to investigate ethnographically how proposed solutions to the euro crisis generate new cultural forms of evaluating money and economic relatedness in the euro-zone.